The second and last time that I visit Chelsea Manning, we speak and move with a sense of urgency, as if a natural disaster is imminent. By now, the Ft Leavenworth prison visit procedure feels strangely familiar, like a movie you once watched in a dream. I check in with the uniformed officer at the Disciplinary Barracks’ front desk, wait uselessly while he misgenders Chelsea and figures out if I’m allowed to visit her, rent a locker to stow my jacket which is prohibited in the visit room (due to the having of zippers), don an unsuspicious smile when the guard tries to deny something i’m bringing (this time, it’s blank drawing paper and pencils – both of which are eventually let through), pass through the metal detector and double-doored atrium, wait for the guard to let Chelsea through the opposite doors, hug briefly, sit down at her favorite table against the wall, buy her snacks from the vending machines twice (first course: Dr. Pepper and Sour Cream and Onion chips; second course: Pepsi and Doritos), watch the other inmates playing cards with their families, make jokes, laugh, cry, talk about computers and pretend we’re just normal friends doing friend-things, except we are forced to return to two separate worlds when the clock strikes 21:30.

She tells me straight up that she was misty-eyed last night after my first visit and knows she’ll be bummed out for the next couple days after I leave. Trying to dispel the palpable gloom, I assure her that I’ll visit again, though I can’t promise when. It doesn’t really work. The sadness is still there, swirling in the small grey room, so thick I can almost choke on it. Fortunately, we are both highly adept at changing the subject and pretending that everything is fine.

I hand her a near-illegible list of questions for her from strangers on Twitter, which I had hurriedly compiled during the drive in. She brightens and grins, scrawling answers in the empty spaces as if it were a high school math exam. 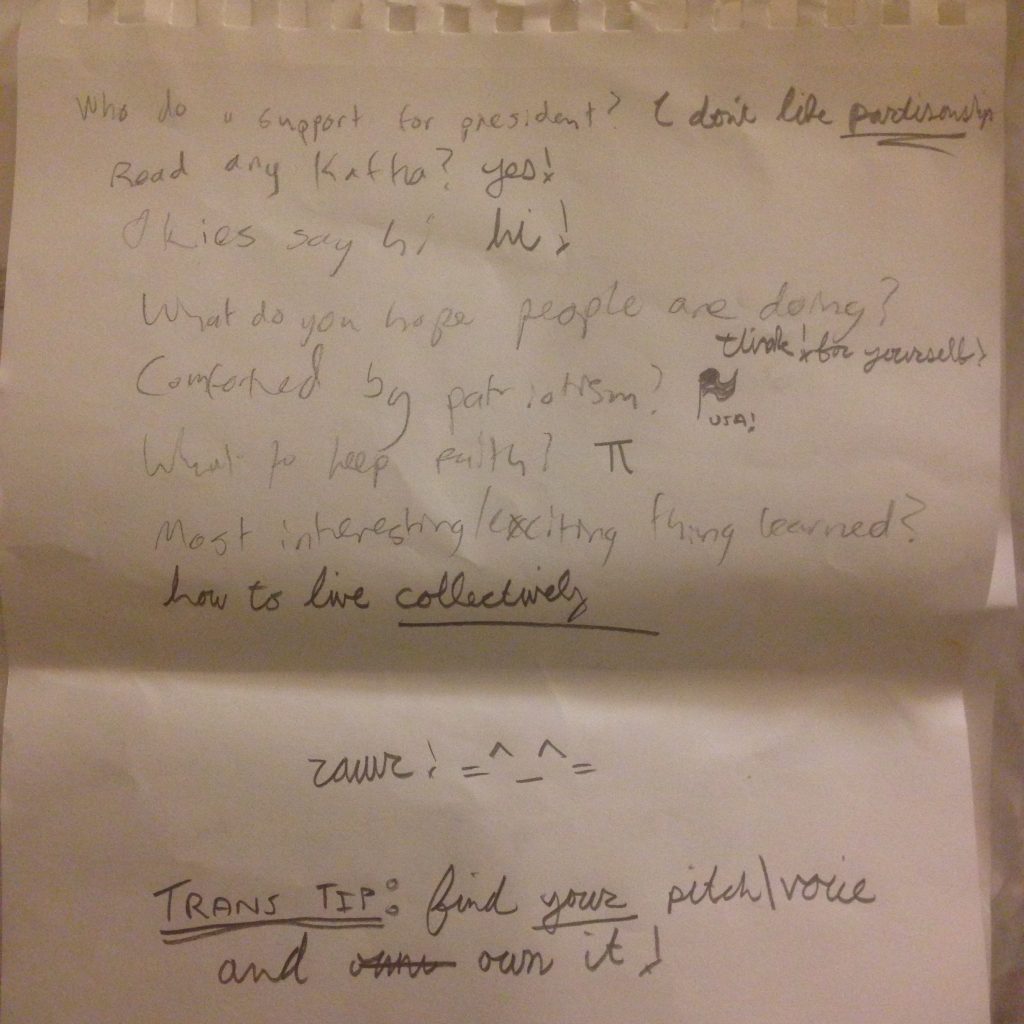 Q: Who do you support for president?

A: [after pausing for a minute, explaining that she isn’t allowed to comment on this question.] I don’t like partisanship. [we chat about pitfalls of the two-party system.]

Q: What do you hope people are doing [in response to your actions]?

A: think for yourselves

Q: Are you comforted by [the knowledge of your] patriotism?

Q: What is the most interesting/exciting thing you’ve learned [in prison]?

A: how to live collectively

Then she picks up another sheet of paper and mischievously says, “I should write some questions for Twitter in return.” 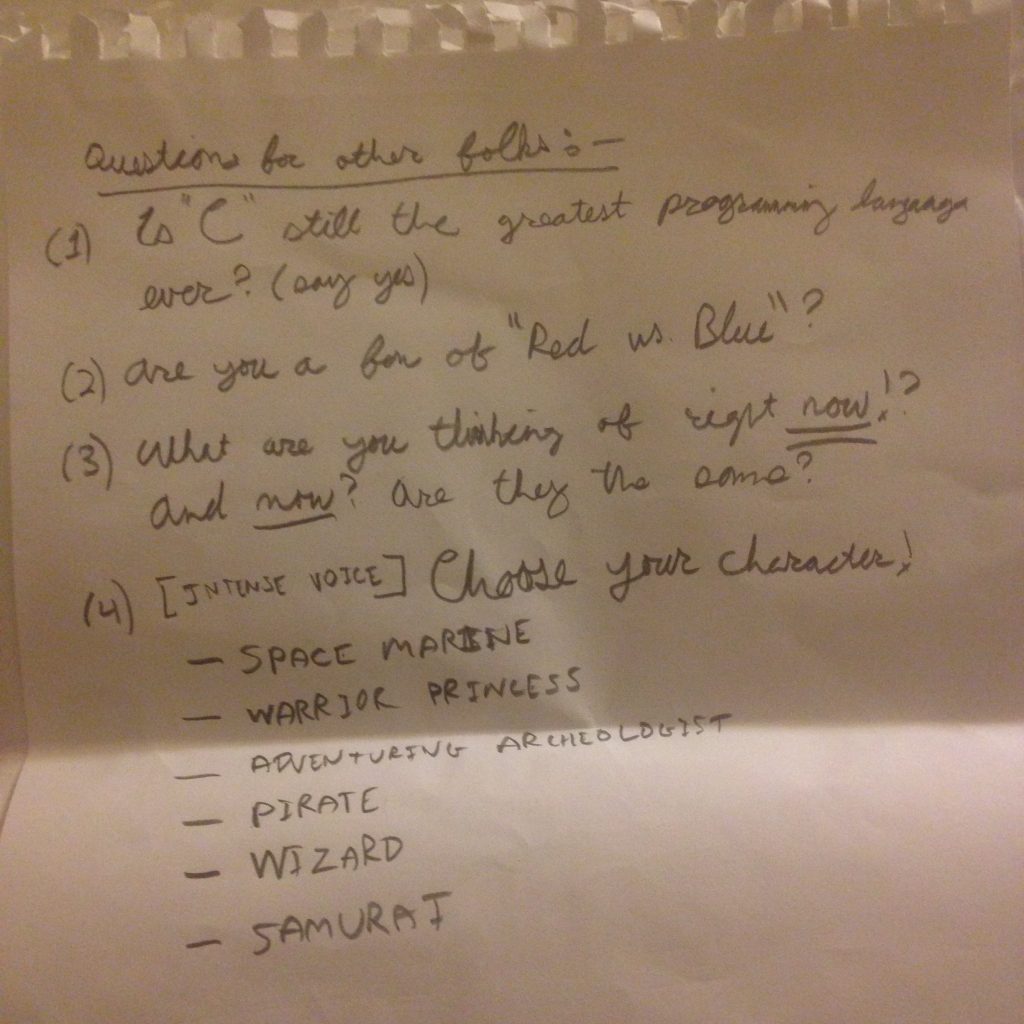 We spend a while chatting about small lighthearted things, like lip gloss quality (a subject on which her opinion is far more sophisticated than mine) and whether the red-orange powder on Doritos actually has any flavor (we agree the answer is no). Then abruptly we start to talk about hope, about her 35-year sentence, about the act of hanging on for as long as you can. Her eyes start to fill with tears.

I tell her about all the people on the internet who care about her, all these people who she can’t see or talk to.

Then I start to cry too.

How many visitors do you have? I ask.

We count them. There’s only four, including me. One of them has never actually visited. She doesn’t know when her next visitor will be.

Only friends and family who knew her pre-confinement are allowed. But that must be dozens if not hundreds of people, I think angrily to myself. Flights to Kansas City aren’t always cheap, but surely we could start a donation fund. My mind starts spinning, madly grasping for schemes to increase her visitor count. Sure, Leavenworth is a quiet boring little town, but rent is cheap and there’s nice hiking trails nearby. We could rent a vacation home and start a commune here with a bunch of her old friends. We’d take turns living here, we’d bring other people to keep us company, we would work and make art and host lectures during the day, we would visit her every night.

I can tell that this would make her life so much more bearable. She jokes that maybe she would become too occupied with visits, that she wouldn’t have time to do her classwork or write columns. A visit once a month would be nice, she says with a smile, but she thinks all her friends who knew her before are too afraid to see her, unwilling to bear the risk of being added to government watch lists. I reassure her that this will get better over time, that paranoia will fade faster than the last photographs the public has seen of her. My words sound empty to me.

And then it’s time to say our goodbyes. We hug as I tell her it’s not really goodbye (I’ll be back, I promise). The guard interrupts, yells at everyone that our time is really up. I try to look at her face, but it hurts to watch the tears come up again. I can tell that the next couple days will be tough.

I pull her back for one last hug.

Chelsea is a former soldier, a celebrated whistleblower, a role model for millions of people around the world, a pioneer for transgender rights, and a hero who will be remembered forever in American history, but right now she is just a small figure in my arms, scared like the rest of us and wanting nothing more than to go home.

I walk out of the visitation room and she goes in the opposite direction back to her cell. For a single crystallizing moment, I play her movements in reverse and imagine her walking with me out of the prison. The guard is weary-eyed after three hours on his shift; he doesn’t notice a thing. Together, we pass quietly through the metal detector, walk down the stairs through the cold glass doors and onto the rain-soaked lawn where the night sky greets us with a starless nod. Barely a mile away, a cute Kansas town of smoke-filled bars, barbecue diners, and kitschy antique shops awaits us. Inside our chests floats a smiling thought of morning.

Then she’s gone. My dream collapses into a hard knot of rage. Chelsea could walk twenty steps, through two doors, past a lone prison guard, and into a life of freedom. In reality, she can’t, because a vast and terrifying justice system stands in the way. Instead, she will spend up to 35 years in a remote prison cell, wishing she had more visitors. Some days she will wake up feeling motivated to conquer a new day. Other days she will wake up feeling like she wants to give up. The world will change around her, but life in the Ft Leavenworth Disciplinary Barracks will mostly stay the same, year after year.

But for now she is doing her best, and her story is far from over.

[Update (5/27/16): Today marks the 6th anniversary of Chelsea’s arrest. She’s written a letter to the world, and The Guardian has published a nice article about it.]