Yesterday the W3C Technical Architecture Group published a new finding titled, “The Web and Encryption.” In it, they conclude:

“… the Web platform should be designed to actively prefer secure origins — typically, by encouraging use of HTTPS URLs instead of HTTP ones. Furthermore, the end-to-end nature of TLS encryption must not be compromised on the Web, in order to preserve this trust.”

To many HTTPS Everywhere users like myself, this seemed a decade or so beyond self-evident. So I was surprised to see a flurry of objections appear on the public mailing list thread discussing the TAG findings.

It seems bizarre to me that security-minded web developers are spending so much effort hardening the web platform by designing and implementing standards like CSP Level 2, WebCrypto, HTTP Public Key Pinning, and Subresource Integrity, while others are still debating whether requiring the bare minimum security guarantee on the web is a good thing. While some sites are preventing any javascript from running on their page unless it’s been whitelisted, other sites can’t even promise that any user will ever visit a page that hasn’t been tampered with. 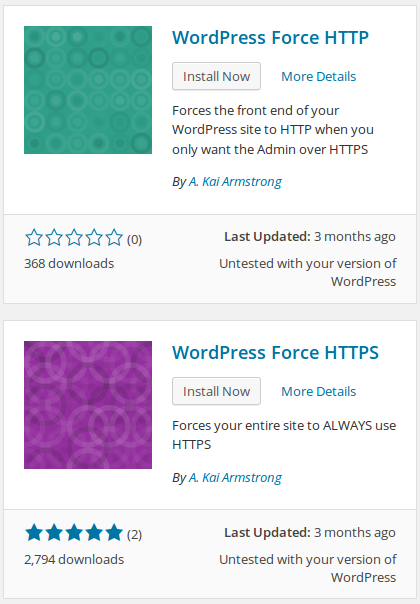 small consolation: the second one has more downloads

Obviously we shouldn’t ignore arguments for a plaintext-permissive web; they’re statistically useful as indicators of misconceptions about HTTPS and sometimes also as indicators of real friction that website operators face. What can we learn?

Here’s some of my observations and responses to common anti-HTTPS points (as someone who lurks on standards mailing lists and often pokes website operators to deploy HTTPS, both professionally and recreationally):

In summary, it’s very encouraging to see the TAG expressing support for a ubiquitous transit encryption on the web (someday), but from the resulting discussion, it’s clear that developers still need to be convinced that HTTPS is efficient, reliable, affordable, and worthwhile. I think the TAG has a clear path forward here: separate the overgrown anti-HTTPS mythology from the actual measurable obstacles to HTTPS deployment, and encourage standards that fix real problems that developers and implementers have when transitioning to HTTPS. ACME, HPKP, Certificate Transparency, and especially requiring minimum security standards for powerful new web platform features are good examples of work that motivates website operators to turn on HTTPS by lowering the cost and/or raising the benefits.